Like most humans, I’m not ashamed to say I’m prone to snap-surface-level judgments when it comes to people I don’t know. There’s no better example than my infatuation with American filmmaker, writer, actor, and artist John Waters who just so happens to love legendary Japenese fashion label Comme des Garçons (please read his immense tribute to Rei Kawakubo here it’s a fascinating read) as much as I do! And the other day I happened to stumbled across this video on YouTube below from a talk he did at ‘Talks at Google’ to help promote his new book Mr. Know-It-All so I decided to pick up and add it to my list of books I’m going to read during the coronavirus lockdown here in London.

And lastly, I’m still mulling over whether I should try my hand at standup comedy. In the hopes of pushing me over the edge, I also picked up a copy of I Killed: True Stories of the Road from America’s Top Comics by Ritch Shydner and Mark Schiff.

The Weeknd is one of my favourite artists. I’ve been a fan of his ever since his early mixtape days. My memory isn’t great but I like to think I stumbled across his work at the same time as I discovered the likes of Frank Ocean and PARTYNEXTDOOR. I love that they each have their own distinctive sound and artistic expression. And considering how similar some R&B artists can be I think it’s to their credit they push themselves out of their comfort zones on each project or constantly evolved their sound, none more so than The Weeknd himself with his latest project After Hours. It’s the perfect embodiment of his sound. And, in my opinion, his best album to date, right up there with House of Balloons (yes I know it’s a mixtape).

I also appreciate the lengths at which The Weeknd goes to maintain his privacy, which I’m sure is incredibly difficult to do given that he’s bonafide pop star. But he does so without coming across overly pretentious yet somehow still managing to connect with his fans on a personal level. You only have to look at the way he responded to the news of the passing of an avid fan and former XOPODOCAST host during the release. He’s a class act. We’re probably not going to get an in-depth interview with him anytime soon, he hates interviews, but I enjoyed reading these tidbits for a recent feature he did with King Kong magazine and I’ve attached a few of my favourites below but you can read the full feature here.

I’ve admired Eddie Izzard for years. Growing up in a conservative-somewhat religious-African household the mere sight of Eddie Izzard was so far removed from what I grew up around I had to dig a bit deeper and find out what made him tick. Eddie Izzard is many things but conventional is not one of them, from his acting credentials to his standup comedy and most recently his work in activism and politics, he defies all conventions. But the part that intrigued me the most was his decision to run 27 marathons in 27 days throughout South Africa as a tribute to the late great Nelson Mandela who was held in prison for 27 years. Even for the most experienced runner, it’s a mean fete, but to embark on such an ordeal being an “average guy” with only 5 weeks training was Herculean, to say the least. And without even trying to do so he immediately demanded my attention and ultimately my respect. People far more successful than me usually say the best way to reach your goals is to closely follow what others in your field of interest have done and follow suit. There’s no better way to do so than reading an autobiography by said which is why I decided to pick up Believe Me: A Memoir of Love, Death and Jazz Chickens by Eddie Izzard the other day, hopefully, I take something away from his story that can positively impact my life! If you’re not a fan of reading I highly recommend checking his appearance on the Joe Rogan Podcast which you can find here.

I have to be honest with you, I’ve slacked off from reading the last few weeks. My usual routine consisted of 1 hour of reading a day, which allowed me to finish around 3-4 books per month, not bad. But as with most hobbies, I let things slip by the wayside and I’ve only managed to finish 2 books in the last couple of months, not good enough for me. But redemption comes in different forms and seeing as we’re going through a difficult time in the world right now with the coronavirus pandemic (COVID 19) it feels like there’s no better time to pick up reading again during the self-isolation period. If you’re interested I’m going to share some of the books I intended to read over the next few months. This will include a mixture of fiction and non-fiction, coffee table books and audiobooks. First, on the list, I have Margrave of the Marshes by Alexandra Ravenscroft and John Peel and Made In Cassina by Giampiero Bosoni.

I recently finished reading The Old Man and the Sea by Ernest Hemingway. It’s a short but confusing read and I’m not sure I entirely understood everything, maybe that’s a good thing. But it also got me thinking about the TV series Westworld. A lot of the criticism aimed at that show came down to people not understanding what was going, but after reading this book I think that’s quite refreshing. In a world where things get dumbed down and presented in an overly simplistic manner, I like having to wrestle with stuff. Not knowing what to make of something and meditating on it a bit isn’t a bad thing and I actually got more from this through this experience.

Going to Berghain every year has really made me appreciate club kids and their outfits. There’s an amazing array of incredible looking people who really make an effort when they go out, it’s cool to see. I’m too used to “dusty chic Hackney Wick warehouse vibe”. Although I think some of the outfits are a bit limited. Leather, PVC, and bondage. My favorite period of club clothing emanated from Studio 54 in the 1970s and 80s. From thrilly blouses, bell-bottom pants, and platform boots it looked like so much fun. I would never correlate Rick Owens with that time period given their overall aesthetic but I like the way he flipped the boot it in his own way. They look incredibly difficult to wear which I actually think is a good thing, you’re required to work a bit harder to make them work with your outfits but I like the addition of the metal cap on the front which reminds me of New Rock boots and the transparent 6-inch heel. It’s nothing short of fabulous! Below are some of my favorite looks featuring the boots, you can see the entire Rick Owens fall/winter 2020 show here. 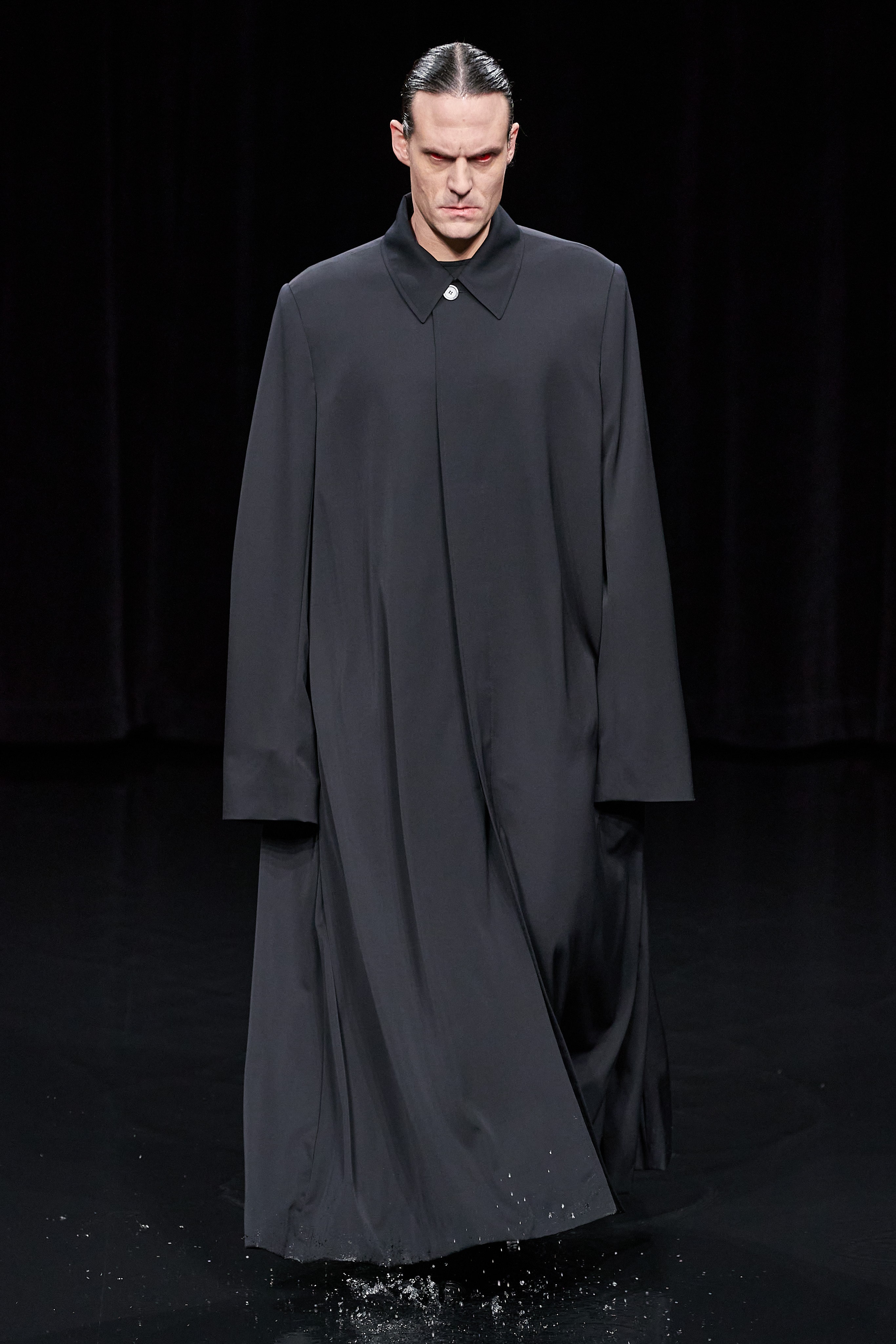 I love it. I’ve been a big fan of all things Demna Gvasalia for a long time. I think some of the work he did at VETEMENTS especially the firs 3-5 collections were some of the best work he’s ever done and his impact on culture is far-reaching. Unfortunately due to the nature of his aesthetic (call it high-end normcore) he doesn’t get the credit he deserves. In recent months Demna has decided to step away from VETEMENTS (which I don’t believe for a minute) to focus entirely on Balenciaga. I really enjoyed the Balenciaga fall/winter 2020 show. I liked the stripped-back nature of the clothes. I loved the tailoring on the outerwear pieces and some of the standout moments such as the spiked jacket and the motorcycle race suits were welcome surprises! Below are some of my favorite looks from the show, enjoy.

It probably wasn’t the best idea in the world but I decided to Contagion last night. According to Wikipedia the movie follows “The death of Beth Emhoff and her son leads to the discovery of a deadly virus. While the US Centers for Disease Control struggles to curb its spread, worldwide panic ensues.” It’s a fascinating movie especially in context with what’s going on with the coronavirus at the moment. The parallels are actually quite frightening, from the various dissenting voices eager to play down the threat of the virus to the corporate interest desperately trying to rewrite the narrative, it’s weirdly poetic. It features an all-star cast and objectively speaking it’s a thoroughly enjoyable movie. Hopefully, this isn’t a case of “art imitating life” and some lessons have been learned since this released in 2011 but judging by the confusion in media at the moment I’m not too optimistic. Things could get worse before they get better. Sorry.

I absolutely love this new video from Lil Yachty featuring Drake and DaBaby. Not only is it carefree and funny it also matches the music perfectly. Lil Yachty journey to hip-hop stardom hasn’t been straightforward ever since he “burst on the scene” (I love that phrase ha) but what I like about him as an artist is his ability to go back to the drawing board and make the necessary changes to his sound in order to “get back in the conversation.” as he pointed out in this interview with HYPEBEAST. It’s also pretty cool to see this new generation of artists have the ability to collaborate with brands such as LG on products they actually give a shit about. It’s an amazing time for fans of hip-hop too, no matter your preference you can find an artist for you. Lil Yachty’s new album Lil Boat 3 is coming out soon and I cannot wait to hear it! 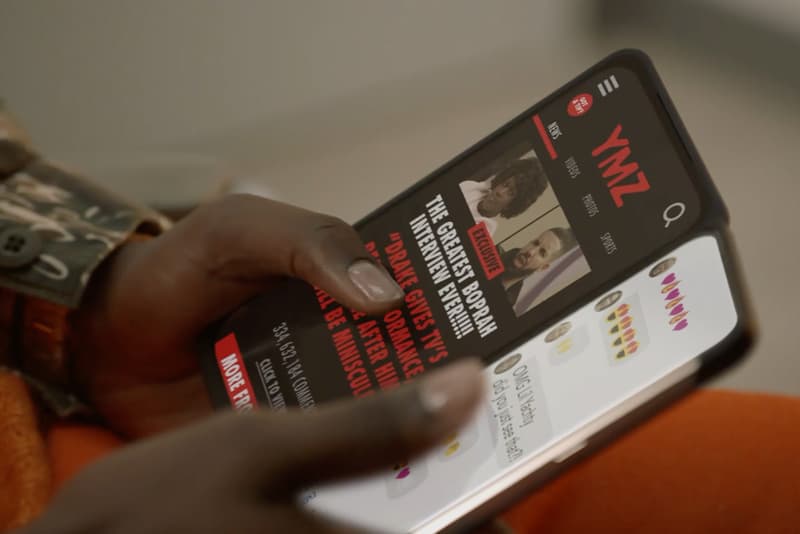